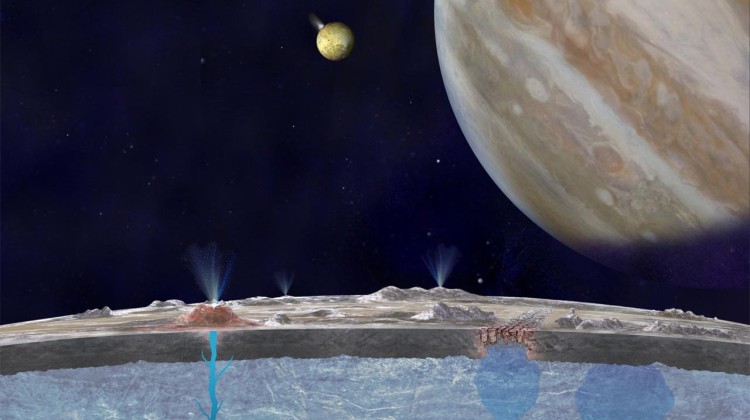 Europa. It’s the sixth-closest of Jupiter’s moons, but probably the most recognizable.
Its surface boasts a unique appearance, icy-white streaked with red. But it is what lies hidden beneath the surface that has scientists—and laypeople—especially excited. Under a layer of water ice 10 miles or more thick, swirls a vast, planet-wide ocean of liquid water.
And, in the case that scientists needed any more convincing of the fact, a team at Spain’s Centro de Astrobiologia in Madrid recently conducted experiments to analyze what Europa’s surface could tell them about its subsurface ocean.

The icy-looking white regions of Europa’s surface are just that: water ice. But the red striations are composed of other minerals, mainly magnesium sulfate and carbon dioxide. How did these minerals get there? Information gathered by the Voyager and Galileo spacecraft indicated that these materials correspond to fractures in the surface and other features of what is called “chaotic terrain,” such as ridges and cracks.

Working with the assumption that these minerals arrived at the surface of the ice through these cracks and fractures, scientists recreated the environmental conditions present in these parts of the ice. They subjected the minerals in an aqueous solution to a very high pressure, almost 300 times that of Earth’s atmosphere, and a relatively high temperature, -4 degrees Celsius (or a brisk 25 degrees Fahrenheit). Then, they watched what happened.

What resulted was similar to magma inside the Earth rising up to the crust, “although, in this case it would be a watery cryomagma that would evolve and emerge outwards from the interior of the icy moon,” said Victoria Muñoz Iglesias, co-author of the paper published in Geochimica et Cosmochimica Acta.
Besides this convective motion, the team observed the formation of three minerals out of the process: water ice, clathrates of carbon dioxide, and hydrated magnesium sulfides. Why is this important? The formation of these crystalline minerals releases energy. Depending on the final proportions of these minerals, the process could result in either a volume increase, “causing topographical features and fracturation of the crust,” or a volume decrease, “and the terrains above might collapse.” Iglesias goes on to conclude: “Some of the chaotic terrains of Europa’s surface could have been produced this way.”
This experiment is not the only recent confirmation of a subsurface ocean on Europa. In December 2013, the Hubble Space Telescope spied an enormous plume of water vapor spouting from near the moon’s south pole. Even before this momentous observation, NASA planned to send a mission to Europa, likely in the form of an orbiter. A craft capable of landing on and testing the surface is beyond the scope of NASA’s current budget.

Before this year, NASA was given a budget of $155 million to devote to a mission program for Europa. Surprisingly, the agency received these funds without having asked for them. For the 2015 fiscal year, NASA received $15 million more to fund Europa research, again without request. This has all amounted to the single most likely concept for a Europa mission: the Europa Clipper. This orbiter, with a price tag of over $2 billion, would fly to Jupiter, ultimately performing 45 flybys of Europa.

The Europa Clipper remains, currently, the mission with the best prospects. This is an unfortunate fact, as the craft in its proposed form has no capability for analyzing the contents of the water vapor plume. If its design remains unchanged in this regard, this will have been an enormous missed opportunity. With the eruption of this water plume, a craft that can land on Europa’s surface is not immediately necessary, as Europa’s surface has come to meet it.

Eventually, however—perhaps soon after studying this plume—a mission of some kind must be sent to the surface of Europa. Michael Shara, of the Department of Astrophysics at the American Museum of Natural History, appropriately delivers this charge: “If we could put a probe down that could melt its way through the ice, and then send out little submarines, who knows what we could find down there. It would be fascinating to go look. I think we have no choice but to go look. We must do it.”