Inside the West Africa Ebola Epidemic 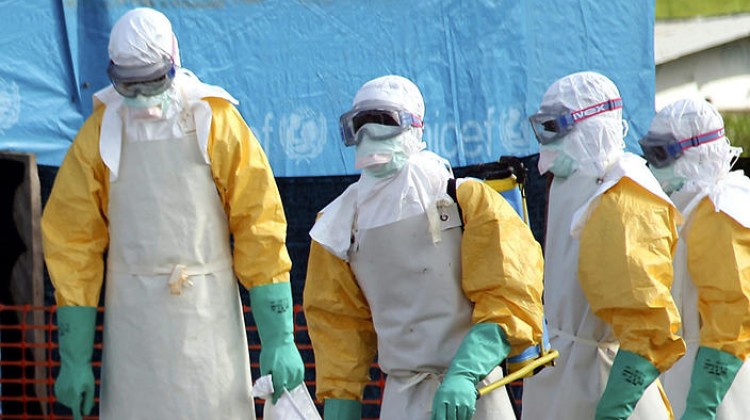 As an ambulance arrives at Emory University Hospital around 12:30pm on Saturday, one notes at least six people in the immediate vicinity. Three guys to the left, next to two white vans, who looked to be part of the media (one was holding a big camera, filming); a cop on the right, in front of the ambulance; another cop on the right, a little further away from the one next to the ambulance; the ambulance driver on the left, standing on the white line in full protective gear. Suddenly, the back door to the ambulance opens and a figure wearing a white hazmat suit, complete with a ventilator, emerges, steps off the ambulance and onto the ground. Seconds later, another figure, now believed to be Dr. Kent Brantly, emerges. Dressed in the same white hazmat suit as the other man who rode in the ambulance with him, minus the ventilator, Brantly, 33, is the first Ebola patient to be flown into the United States for treatment.

As one watches the scene unfold, one can’t help but note that, aside from Brantly, the only two people at the scene wearing any kind of protective attire is the guy assisting him and the ambulance driver. Thanks to a photo snapped by a photographer or reporter, one also can’t help but note that the ambulance driver took off the protective hood during the drive to Emory. Her mouth and nose are covered with a surgical mask, but her hair and the rest of her face are not.
Then again, as many Americans following this story must know by now, although Ebola is considered highly contagious, it is not an airborne virus. Ebola is spread through direct contact with an infected person’s body fluids such as blood, sweat, tears, urine, stools and vomit. A person suffering from Ebola is reportedly most contagious during the final stage of the disease, when he or she begins frequently vomiting, bleeding and has diarrhea. It is also important to note that the virus can survive several days outside the body, at room temperature, on things such as tissues, wash cloths, needles, gloves, etc. and touching those materials after they were used to care for someone suffering from Ebola has the potential to infect.

Brantly and his colleague, Nancy Writehol, 59, reportedly contracted the virus sometime last month while caring for Ebola patients in Liberia, one of four countries affected by the current outbreak in West Africa. She is due to fly into Atlanta on Tuesday where she, too, will be treated at Emory, which will make her the second Ebola patient to be treated on US soil.

In fact, healhcare workers have been disproportionately affected. Brantly and Writehol are not unique. Over 100 healthcare workers from the current Ebola outbreak in West Africa have contracted the disease, despite training and reportedly wearing full protective gear, including a top Ebola doctor in Sierra Leone, two top doctors in Liberia and, as of today, a doctor in Nigeria. So, how does this happen? According to reports, several ways.

Since this is the first time any country in West Africa has experienced an Ebola outbreak, many staff working at West African hospitals are inexperienced and untrained with following proper protocol when caring for patients with Ebola. Experts say that it is not hard for doctors and staff to avoid contracting Ebola so long as they follow the strict, methodical and repetitive procedures via sterilizing and disinfecting all materials and equipment and protection gear, each and every single time. But, with an ongoing epidemic and new patients flooding the clinics every day, there was little time to for inexperienced staff to get in the habit of taking such important precautions.

To make matters worse, many West African hospitals were not equipped with all the materials necessary to protect themselves from the virus. Essential items such as gloves, goggles and hazmat suits were in short supply. Proper protocol is to burn all protective gear once it is removed, but thanks to the short supply, items like gowns and gloves were often re-used.

But even health workers who are properly supplied with protective gear are not completely safe unless they consistently follow protocol when removing it, which takes up to 45 minutes. “The risk of getting infected when taking the suit off if proper procedures are not followed is high,” notes Ken Kauffeldt, the director in Liberia of Samaritan Purse.

That’s not to say, however, that any of this was the case for Brantly (who was reportedly always very careful) or Writehol, but it’s been known to happen.

The ongoing Ebola outbreak in West Africa has left many Americans concerned for multiple reasons. The first is the sheer numbers. There has never been an outbreak this big before, nor has there ever been one this spread out. With 1603 cases, resulting in 887 deaths, it is, by far, the largest Ebola outbreak in history. Since the virus appears to be spreading faster than it’s being contained and currently shows no signs of slowing down, many fear it could eventually become a global epidemic.

Just last week, Patrick Sawyer, a man infected with Ebola but did not know it, flew on a plane from Liberia to Nigeria when he reportedly fell ill on the plane and began showing symptoms. He was quarantined upon arrival and later died while in the hospital, but not before managing to infect a doctor caring for him there.

With the current outbreak more widespread and infecting more people than ever before, this incident has left many worried that it’s only a matter of time before another Patrick Sawyer takes a plane to another continent and spreads the disease to wherever he or she lands, which could then have a domino effect and eventually bring the disease to the US. The fact that Sawyer was an American citizen who was due to fly to Minnesota in a couple of weeks only further fueled people’s fear that Ebola is only a plane ride away from becoming an epidemic in the US.

Secondly, many Americans were not thrilled with Emory’s decision to treat Brantly and Writehol. Many people feel that bringing anyone infected with Ebola to a country that has never had to worry about Ebola puts the entire country at a risk for contracting the lethal disease. Some fear their presence will lead to an eventual Contagion-like outbreak.

Lastly, in an experiment conducted in Canada in 2012, Ebola-infected pigs were shown to transmit the virus to monkeys via aerosol droplets. This has led some Americans to incorrectly conclude that, despite what the CDC says, Ebola is airborne and it is possible to contract it from another person that way. But that is false. What the study actually proves is that pigs, who have been shown to produce more Ebola-containing aerosols than humans, are able to transmit the virus through aerosol droplets (which is not the same as airborne, by the way). But there is no evidence that humans are able to transmit the virus that way.

While ignorance and misinformation about Ebola has left some Americans paranoid about catching it, it has seemingly had the opposite effect on many locals in West Africa, especially at the beginning of the epidemic, which may have made it harder to contain. Sierra Leone, Liberia and Guinea are third-world countries. The majority live in extreme poverty and have little to no access to radios, TV and Internet. As such, many rely on superstitions, tribal gossip and rumors for information. Some believe Ebola is a conspiracy by the government to steal their organs. There are reports of many locals suspected of having Ebola hiding out from clinics for fear of being sent to them. Some local villages have even chased off aid workers from their area. Other villages have blocked them off entirely, barring them from entering.

Others believe Ebola doesn’t exist. Some believe Ebola does exist, but fear going to the clinics because they think it’s an automatic death sentence. Others don’t trust Western doctors and rely on witch doctors and so-called faith healers to cure them. Even some who do believe Ebola is real and trust the doctors at Ebola clinics can pose a problem due to ignorance over how the virus is spread.

“We had a problem with the first patient to use our isolation unit,” writes Dr. Naomi Platt, who recently served as a doctor in Sierra Leone. “He and his family accepted that Ebola was real, but they could not grasp how easily it is transmitted…he was found naked on a bed stripped clean of sheets. He had passed his clothes and bedding to his mother through a window…They thought they were doing the right thing…but had he been found to be suffering from Ebola, he could have inadvertently spread the virus to his mother and the wider community.”

Needless to say, for the health workers, educating and gaining the trust of locals has been half the battle in this ongoing epidemic, and an uphill one at that.
Since then, coordinators have stepped up efforts and reached out to respected tribe leaders to educate locals on the reality of this disease and gradually, locals are starting to come around. More and more patients have been showing up at clinics. The question is, is it too late? As of right now, the ongoing Ebola epidemic of West Africa has reportedly infected 1603 people and lead to 887 deaths. And counting.

As Liberian Information Minister Lewis Brown gravely noted, “The dire prognosis is that it will get worse before it gets better.”