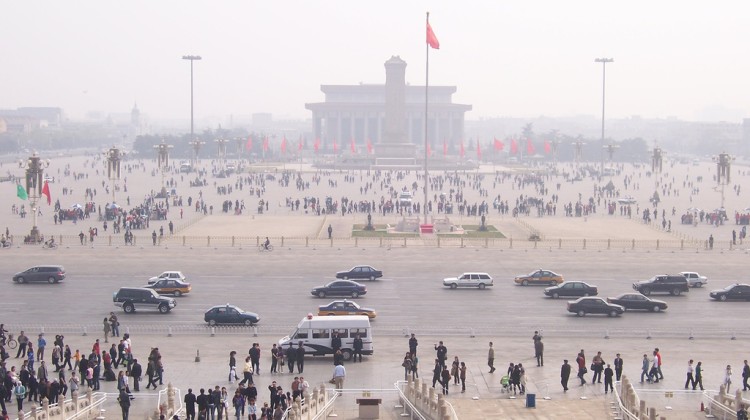 On June 5, 1989, the picture of a young man standing in front of a line of tanks in Tiananmen Square shook the world. This picture was taken after the Chinese military violently suppressed the protests.

More than 26 years later, it is still unknown who this young man is and what happened to him, and according to ZME Science, the entire event is censored in China.

The 1989 Tiananmen Square protests began as a student movement in Beijing. Students were gathered to mourn the death of former Communist Party General Secretary Hu Yaobang, a liberal reformer. Residents of the city widely supported the movement, which revealed the division between Chinese leadership and the people.

China was experiencing a period of massive inflation and corruption scandals. Protesters were demanding freedom of the press, freedom of speech, and accountability for the government. This is the exact opposite of what happened in 1989.

More than 300,000 troops were deployed to Beijing and they were authorized to use whatever force deemed necessary to bring the protests to an end. The Tiananmen Square Massacre followed this directive.

Tanks and armed soldiers opened fire on the protesters, and a bloodbath ensued. The actual number of casualties were never reported; it was predicted to be in the thousands. That day, the democracy of China was stomped under the boots of the military.

After the massacre, after the protests were stopped, mass arrests were carried out. Many were tried and executed. Martial law was imposed, and the Chinese government blocked all satellite transmissions to international broadcasters and expelled foreign journalists.

The shocking image that resonated around the world of an unarmed man, alone and helpless against multiple tanks was more impressive because the act took place the day after the massacre. The day after the Chinese military opened fire on a crowd of innocent, unarmed protesters. This man was aware of what was happening. He knew people were being killed by the masses, and yet there he was, with his shopping bag, black pants and white shirt as if it were an ordinary day. “Sometimes, you just want to make your point so badly that you stand in front of running tanks.”

According to an eyewitness account, the man used the shopping bag to gesture toward the tanks in Tiananmen Square. They attempted to go around the man, but he continuously blocked their path. Eventually, the lead tank shutdown the engine. The man climbed onto the tank and spoke with one of the gunners through the hatch. Then, he descended from the tank, as the engine restarted, and he quickly jumped in front of the tank again.

This man, with no known identity, was taken into the crowd by two figures dressed in blue. It is still not known if the figures were members of the government or concerned citizens. Whoever he was, the Tank Man became an icon to the Western World; a symbol for the fight for democracy and the courage to stand up for what one believes is right, regardless of the opposition. His heroism is unknown in China.

China has censored the Tiananmen Square event and the photographs that went with it. Sixteen years later, students were shown a copy of the iconic image and they were “genuinely mystified.” Some even believed the images were fake.

Chinese authorities still do not allow open discussions of the “June 4th incident” in the media or on the internet. “China’s foreign ministry spokesman, Hong Lei went as far as to censure U.S. calls to provide a full account of the crackdown, calling them ‘political prejudice.’” The country’s most popular social media platform does not allow searched about the incident and redirects people to other harmless events.
A movement for peace. A stand for freedom and democracy. An unknown man who stopped the tanks in Tiananmen Square.

The image of the Tank Man in Tiananmen Square moved the world, unfortunately it did not move China.