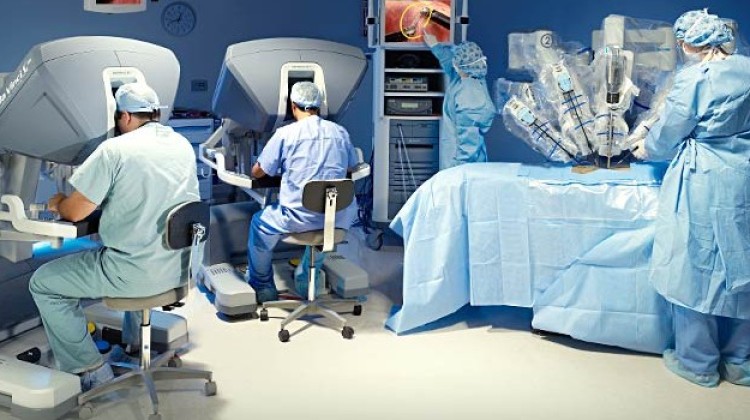 Treatment of prostate cancer provides a powerful example of how robotic technology advances medical treatment and fosters better patient outcomes. Before the introduction of robotics into the medical arena, surgeons seeking to perform a complex radical prostatectomy combined with laparoscopy found themselves constrained by the remote anatomical location of the prostate. But the Da Vinci Surgical System—robotic technology developed by Intuitive Surgical of Sunnyvale, Calif.—has enabled them to offer patients a viable minimally invasive alternative to open-incision radical prostatectomy.

In the United States, prostate cancer is the second-leading cause of cancer death among men. Radical protastectomy, which involves surgical removal of the prostate gland, is a widely used treatment, as it has a high cure rate. However, there are drawbacks. The procedure:

• Is invasive and physically traumatic
• Requires a large incision (8 to 10 inches) that results in substantial blood loss, post-operative pain and a lengthy recovery
• Can cause impotence and incontinence

• It was difficult to learn and perform.
• Rigid laparoscopic tools inhibited the surgeon’s dexterity and control.
• Surgeons needed to perform precise suturing within a small area, which required long hours (and induced surgeon fatigue).

The Da Vinci technology—with its visual system and robotics— allows them to easier remove the prostate through laparoscopic surgery, as it enables better visualization of anatomical structures and better manual precision, using robotic arms and micro-tools. As such, more procedures have been accomplished since its introduction.

While the system enables physicians to perform complex, minimally invasive surgeries, the physician never actually touches a patient—at least not with his own hands. Robotic arms perform the actual surgery, while the surgeon sits at a console, on the other side of the operating room, directing the procedure. The patient-side cart provides the four robotic arms, which include three instrument arms equipped with the EndoWrist instruments and an endoscope arm, equipped with a 3D camera. The camera and instruments are inserted into the patient’s body through the small keyhole incisions.

• The surgeon directs the procedure with his own hand movements on a panel that translates these movements into the precise surgical maneuvers performed by the robotic arms, which operate the micro-tools that perform the complex laparoscopic surgery inside the incisions.

• The endoscope provides a high-resolution, three-dimensional view of the surgical field that is seen in the surgeon’s console. The surgeon directs the operation via the 3D image, which magnifies the surgical field 35 times. The magnification and 3D image gives the surgeon better control of the micro-tools, which perform the extremely precise tissue manipulation, cutting, cauterizing and suturing.

• The remarkable visualization with its enhanced 3D view provides natural depth perception and facilitates the eye-hand-instrument alignment necessary to accomplish the extremely precise tissue manipulations. This is how surgeons can accomplish preservation of nerves that affect erectile function.

The robotic surgical system is a mechanical extension of the surgeon. It is not designed to take the place of a surgeon. It’s incapable of operating without the surgeon. Physicians have described it as collaboration between surgeon and robot. The Da Vinci system has been successfully deployed in thousands of prostate cancer procedures worldwide. Usage in the United States is steadily increasing, as more physicians recognize the surgical options it afford.