Pangolins in Peril of a Silent Extinction 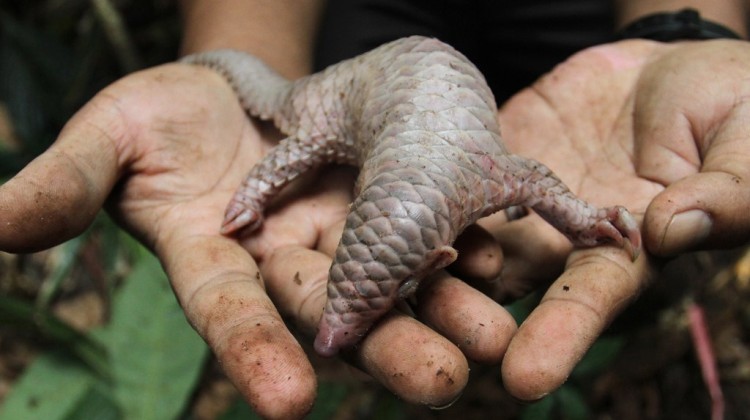 Resembling a walking pine cone, the pangolin is a spiny anteater highly prized in Asia. Its scales and blood, used in traditional medicine, and delicious flesh are widely trafficked on the international black market. The huge demand for this shy, nocturnal creature now threatens the pangolin’s continued existence.

Pangolins, two species of which are highly endangered, lack the media attention granted to other species teetering on the brink of extinction. Tigers, whales and pandas are all well-known and protected animal celebrities. While the armored, toothless pangolin quietly assumes the title of most trafficked mammal on Earth.

Between 116,000 to 200,000 of these creatures were estimated to be illegally traded over a 2-year period, according to Annamiticus, an animal-rights group. Astoundingly, these numbers outpace even the sale of elephant and rhino ivory. Pangolins are believed to possess astonishing magical abilities. Their scales, mixed with tree bark, are said to ward off evil spirits and create strong love charms. In some parts of Africa the creatures are sacrificed in rainmaking ceremonies, or burned to scare away lions.

Trapped in Indonesian forests, pangolins both alive and frozen, are also sold by the ton in China. The Journal of Chinese Medicine credits the animal with the additional attributes of promoting menstruation and relieving the pain of arthritis. Chuan Shan Jia or pangolin scales, are dried and mixed with oil, butter, vinegar, or male urine. The resulting paste is classified as ‘salty and cool’ and as ‘entering the liver and stomach channels’. Wealthy restaurant patrons eagerly pay top-dollar to indulge in banned dishes made of pangolin.

Little is known about the remaining wild populations of this creature and funding for research is almost non-existent. Making conservation even more difficult is the fact scientists lack solid data on how many even exist in the wild and in captivity, pangolins typically die quickly, with no apparent cause. This is why zoos almost never feature them in exhibits. Almost nothing is known of their diet, how they interact in their native habitats, or their mating habits.

Even pangolins saved from the eventual fate of being eaten, or being ground into curative tonics, arrive at conservation centers on the verge of death. Poachers keep the animals stacked in tiny cages, pulling off scales gradually as needed. Starved, dehydrated and highly stressed in transit, up to 40% perish within days.

Greater enforcement of anti-poaching and trade restrictions are urgently needed. In 2011, Indonesian customs officials inspecting shipments of fish discovered 5.9 metric tons of pangolin meat and 790 kilograms of scales hidden in the cargo. TRAFFIC International, a wildlife trade organization, says the illegal trade of the animal has grown ‘to ridiculous levels’. The punishment for killing, or smuggling pangolins is low enough to make the risk worthwhile.

The ecological impact of the massive population destruction of the species can only be guessed. What can be known is that a single pangolin eats tens of thousands of insects per year. Their vacancy in the food chain could lead to massive population explosions of ants and destructive termites. Despite efforts by The International Union for the Conservation of Nature, World Pangolin Day held on February 15, generated only mild excitement. Almost completely unknown, the pangolin could become extinct–with few people even knowing it ever existed.