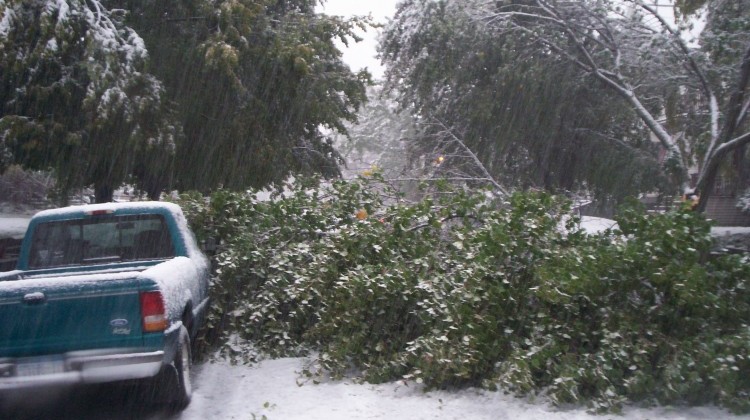 For climate change skeptics, recent days have been a prime example that climate scientists have exaggerated the global warming scare, with temperatures in the eastern US dropping 5 to 25 degrees F below average. However, even with this second round of anomalously low temperatures, 2014 average temperatures are not unusual in the longer temperature record, with the two cold fronts barely keeping pace with overall warming.

In fact, even as the US experienced an especially cold winter by recent standards, the most recent winter was the 8th warmest winter on record globally, suggesting that even freak cold events cannot match the steady if less dramatic impacts of climate change. Even in the US alone, the long, cold winter was only the 34th coldest in the past 119 years – not even in the top 25 percent of cold winters despite all the press about its extreme length and intensity.

Global warming refers to an increase in the overall average temperature, but it does not preclude cold events like the two observed this year. It is possible that these two events would have been less intense if not for global warming, although scientists have not conducted an attribution study to determine the extent to which global warming explains the intensity of these specific cold weather events.

Scientific research does suggest that such cold events are becoming less frequent and less intense in a warmer world, especially in comparison to heat events. A 2009 report by Climate Central, the National Center for Atmospheric Research, the Weather Channel, and the National Oceanic and Atmospheric Administration showed that in the past decade, the ratio of record highs to record lows has steadily increased, with more than twice as many record high events than record low events in the 2000s. These cold events will continue to occur in a warmer world, just not at the same frequency as heat events.

The most recent cooling is similar to the winter cold event in its impacts with a colder east and warmer west, but the causes of the two events are unrelated. The winter polar vortex was a stratospheric event caused by the weakening of polar winds, while the summer cooling is a tropospheric event resulting from the invasion of two cold air masses from the North Pacific and Canada.

Typhoon Neoguri, which originated in Japan, likely played an important role in shaping the recent cooling pattern by accelerating the North Pacific jet stream. The intensified jet stream in turn amplified high pressure over the western United States – resulting in hot, dry conditions – and low pressure over the Midwest, with the accompanying cold conditions.

Even with these two unrelated cold events in the same year, the cooling phenomenon has not been universally observed. Even as the eastern United States has experienced a chillier summer, the West has instead experienced warm, dry conditions, a concern for regions like California that face serious drought. Summer is typically California’s dry season, but the higher temperatures have increased evaporation and thus increased the impacts of the drought.

For a state already struggling to meet its water demands, this summer temperature anomaly hasn’t offered any relief. And for the lucky people enjoying a break from a typically humid, uncomfortable summer, celebration may be short-lived – a future heat event is far more likely than another cool stretch.