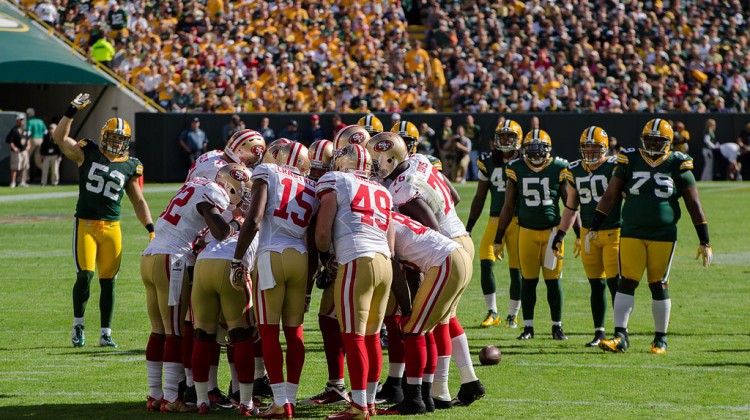 Just one season after losing the prestigious coach, Jim Harbaugh the San Francisco 49ers have officially decided to let go of rookie coach, Jim Tomsula. The 49ers finished the season with a 5-11 record and won their last regular season game against the St. Louis Rams with a score of 19-16 in overtime. The Niners will also finish with a 5th place ranking in the National Football Conference (NFC) West Division.

Tomsula struggled as he coached his first year as a National Football League (NFL) head coach. He worked for the 49ers prior to this year but was only a defensive coordinator. The only experience he had as a head coach was for an NFL European team. The San Francisco 49ers’ CEO, Jed York, stated that one of the few reasons he decided to promote Tomsula, versus reaching out to other NFL head coaches, was due to that fact Tomsula had great strength in mentoring and teaching his players. Still, fans and members of the organization questioned this decision.

York will team up with the Niners’ general manager, Trent Baalke, in the organization’s second head coach search in two seasons. Prior to this process, in a press conference, York repeatedly apologized to the entire San Francisco 49ers’ fan base, as he was fully aware of the disappointment fans had expressed throughout the entire season.

The San Francisco 49ers’ season may have ended, but the search for the newest head coach has begun. There is a handful of candidates that Baalke and York have mentioned who could replace Tomsula. Chip Kelly, who coached the Philadelphia Eagles (2013-2015) and the Oregon Ducks (2009-2012) is on the list of coaches the Niners are considering. Kelly and the Eagles may have finished the season being 7-9, but Kelly may be a considerable candidate as his strength is in offensive coordination. This may work well with the Niners’ quarterback, Colin Kaepernick. Despite having experience with the Eagles and the Ducks Kelly, unfortunately, has received negative opinions circulating around the San Francisco 49ers’ fan base.

Another coaching option is Hue Jackson. Jackson is the current offensive coordinator of the Cincinnati Bengals. Prior to this contract, Jackson was the head coach of the Niners’ crosstown rival, the Oakland Raiders. He did not have a promising season, as he and the Raiders finished with an 8-8 season in 2010. GM Baalke has stated that he is a fan of Jackson and this could lead to him having a possible second chance being hired as a head coach.

Mike Shanahan has not coached since 2013 when he coached the Washington Redskins. Shanahan may be an ideal candidate as his name has circulated throughout the NFL for decades. Prior to coaching the Redskins for three years, Shanahan started off his coaching career with the Los Angeles Raiders for one year but he spent 13 years with the Denver Broncos; from 1995-2008. Shanahan also led the Broncos in two Super Bowl victories in a row (1998 and 1999). The San Francisco 49ers may have to fight for Shanahan, as it has been announced to the public that he also has an interview with the Miami Dolphins.

With the recent release of coach Tomsula, the 49ers must do their homework and do what it takes to make the fans happy. Former coach, Jim Harbaugh had some great seasons with the Niners, and overall set a high standard for Tomsula, one that had poor results. CEO York and GM Baalke will have to find a coach that can turn the franchise back around in order to have higher chances to be Super Bowl-bound next season.