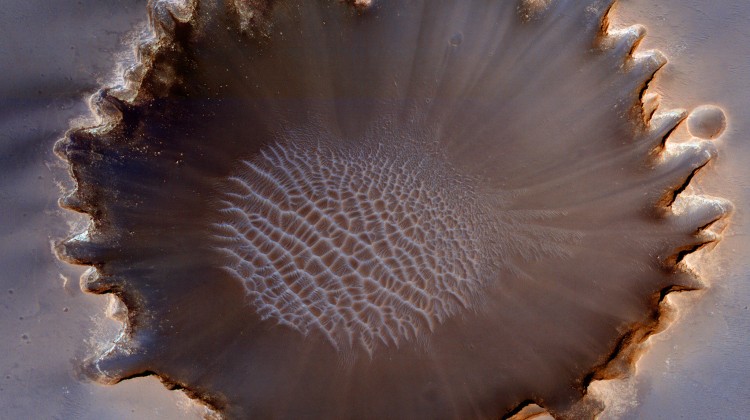 Images from the European Space Agency’s Mars Express mission revealed an extraordinary feature on the surface of the planet. However, the extraordinary feature has posed more questions than answers for scientists. Is it the remnants of an old supervolcano, or is it a crater left from a meteorite crash?

In 2003, the European Space Agency (ESA) launched Mars Express to explore the planet. The orbiter is still exploring and providing valuable information into the Red Planet. Currently, it sent astronomers pictures of Ismenia Patera.

Patera is Latin for “flat bowl.” The crater is 75 km across. The central area is flat, and it is surrounded by “a ring of hills, blocks, and lumps of rock,” which appeared to have come from the center. The Ismenia Patera lies between the southern mountains and the northern plains of Mars.

The topography of Mars is split into two parts: the northern lowland and the southern highlands. The clear split makes an interesting puzzle for scientists, as the cause of the split is unclear. It could have been from a massive impact, several small impacts, tectonic activity, or supervolcanoes.

If scientists could understand Ismenia Patera, it could be the puzzle piece that would help astronomers to understand the transition area and the geological history of the Red Planet.

There are currently two competing theories: one is that it is a supervolcano. The supervolcano erupted and ejected massive quantities of material, collapsing after the magma was thrown out. The other theory is that it is the site of a meteorite collision with Mars.

The only clues astronomers have are the visual data and their limited knowledge about the Red Planet. Although the transitional area shows signs there was a volcano province.

Astronomers are hopeful that future missions will offer more surface and subsurface information, allowing them to uncover the planet’s puzzle pieces and put them together.

ZME Science: A Martian puzzle: is this a supervolcano or an impact crater?