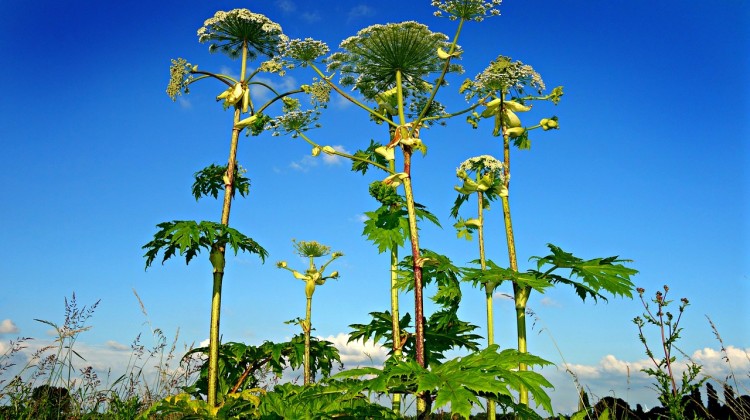 The sap of the invasive plant causes third-degree burns. All it takes to be burned by the plant is to brush up against the bristles.

The giant hogweed has been identified as Heracleum mantegazzianum. There approximately 30 of these large plants in Clarke County. Locals have been warned to keep an eye out for the hogweed. The plant is native to the Caucasus region appears to be benign, however, it is dangerous.

The towering plant is a serious health hazard to humans. It exudes a clear, watery sap that contains photosensitizing agents. The phototoxic chemicals, or furanocoumarins, are highly reactive to UV light and causes severe burns and blistering.

The reaction that occurs from the excretion causes dark painful blisters that erupt within 48 hours and results in scars that can last from a few months up to six years. Touching the plant can also make the person sensitive to sunlight and can cause blindness if the sap gets into the eyes.

Invasive plants, such as the hogweed, are also an ecological threat. The plant forms tall, dense, and deeply shaded branches that push back the growth of species that are native to the area. Additionally, during the winter months, the soil beneath the plant becomes bare and easily erodes.

The Giant Hogweed is listed on the Virginia Invasive Plants Early Detection Species. This means the plant is not widely established in the state, however, it is known to spread to habitats that are similar to Virginia.

According to the DEC, the plant has also been found in Ohio, New York, Pennsylvania, Washington, Maryland, Michigan, Oregon, New Hampshire, Vermont, and Maine. The toxic plant came to North America in the mid-19th century.

If anyone accidentally comes in contact with the sap from the hogweed, wash with cold water immediately. The reaction can begin as soon as 15 minutes after contact. It is important to get out of the sun once coming into contact with the plant. Apply sunscreen to the affected areas. Soak a towel or compress in aluminum acetate and apply. Aluminum acetate can be purchased from most pharmacies to temporary relief.

If the sap gets into the eyes, immediately rinse with water and wear sunglasses.

The giant hogweed is not just dangerous, it is resilient. Each plant sheds thousands of seeds that remain viable in the soil for years.

Do not try to mow or weed-whack the giant hogweed. It will only cause the plant to grow more and potentially expose the person to the toxic sap. Instead, call the local authorities for professional help.