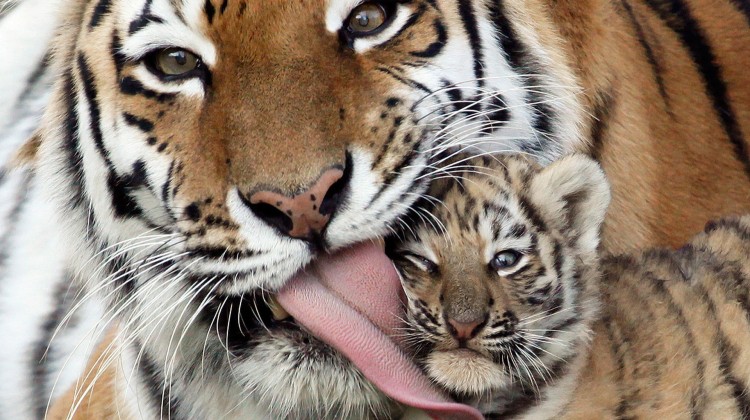 A five year old Sumatran tiger has given birth to triplets at London Zoo, with the entire process captured on remote cameras. The tigress, named Melati, and her three new cubs are all doing well and are still residing in one of the Zoo’s special cubbing dens. All three cubs were born within an hour of each other after their mother’s one hundred and six day pregnancy. Melati leaves her cubs only occasionally in order to receive food and her keepers are pleased to say she has responded wonderfully to her new babies. The sex of the cubs is as yet unknown and so they have not been formally christened. However, zookeepers report that their personalities are starting to show and one cub has been nicknamed Trouble due to his or her adventurous and mischievous disposition. He was reportedly the first of the cubs to start exploring the den as well as waking up his siblings when they fell asleep.

The father of the cubs, a tiger names Jai Jai, is still part of the regular Tiger Territory of the Zoo and can be observed as normal by visitors. Video footage of the birth as well as continual updates of the cubs and mother is also available on Youtube and will be kept updated throughout March. The zookeepers monitor the tigers around the clock and have witnessed some seminal moments in their first few days of life, including opening their eyes for the first time and their hesitant first steps. The safe arrival of the cubs is particularly special for the London Zoo as the first Sumatran tiger cub they had acquired in seventeen years was found drowned less than six months ago. The cub had been only two weeks old when it was found at the side of a pool in the Tiger enclosure.

The Sumatran tiger is the smallest living sub species of tiger and is native to the Indonesian island of Sumatra. It is a severely endangered species with only 400 or so believed to be left in existence and the only surviving member of the Sundra Island set of tigers that previously encompassed the now extinct Bali and Javan tigers. Despite tough penalties for poaching and trading, and the legal protections provided by the Indonesian government, the popularity of tiger parts and merchandise is still across most of Asia. The tigers also suffer from loss of habitat as deforestation occurs to make way for things like Palm Oil and Acacia Plantations, as well as reduction in their prey base due to similar reasons for their own depleted numbers.

The successful birth of these triplets is significant progress for the global breeding program of this rare species, as well as a being a proud moment for London Zoo. Perhaps with the global spotlight on these three cubs there is hope that the plight of the Sumatran tiger will gain further publicity and create a hopeful future that does not end in their extinction like so many other great creatures before them.