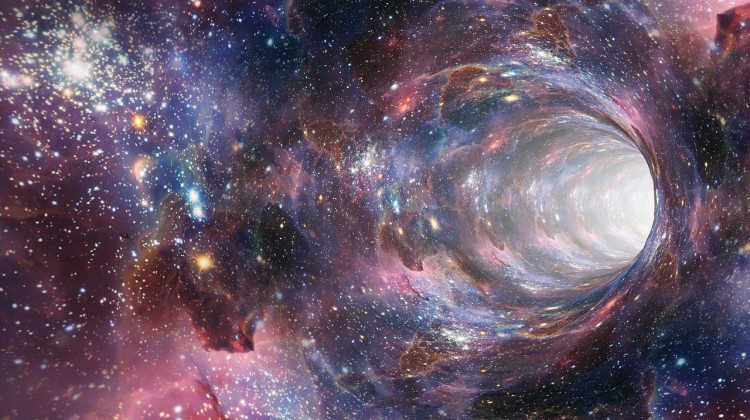 “For the first time, astronomers have directly imaged a supermassive black hole ejecting a fast-moving jet of particles as it shreds a passing star.”

This is not an ordinary black hole, whose mass is a couple times that of the Sun. Supermassive back holes can have millions, or in some cases, billions of solar masses. Almost every galaxy has a supermassive black hole at its center, which influences its development, including the Milky Way.

The gravitational pull of the supermassive black hole attracts and draws in materials from its surroundings, however, not all of it will be absorbed at once. The black hole will form a rotating disc then, launch superfast jets of particles from the poles of the rotating disc at speeds close to the speed of light.

In 2005, astronomers working with the William Herschel Telescope, in the Canary Islands, identified a burst of infrared emission. The emission came from the center of one of the colliding galaxies in Arp 299. Later, the National Science Foundation’s Very Long Baseline Array (VLBA) discovered a new, distinct source of radio emission from the same nucleus.

As time passed, the newly discovered object remained a bright infrared and emitted radio wavelengths. However, it was in visible light and X-rays, according to Seppo Mattila, of the University of Turku in Finland.

The most likely explanation is that thick interstellar gas and dust near the galaxy’s center absorbed the X-rays and visible, then re-radiated it as infrared.

Scientists continued to observe the situation with the VLBA and other radio telescopes. They were able to confirm that the source of the radio emissions was expanding in one direction. Like scientists believed, it was typical of a jet.

The VLBA is a huge interferometer that consists of 10 identical antennas on transcontinental baselines that span up to 8,000 km, from Mauna Kea, Hawaii to St. Croix, Virgin Islands.

The radio antennas are separated by thousands of kilometers and allow the VLBA to gain an incredible resolving power. It ca see fine details, which is required to observe the features of an expanding object from millions of light years away.

The VLBA observes at wavelengths of 28 cm to 3 mm in eight bands plus two sub-gigahertz bands, including the primary spectral lines that produce high brightness maser emission.

The jet is emitted by a supermassive black hole, which is located at the center of one of the colliding galaxy pairs called Arp 299, according to researchers. The black hole is approximately 20 times the size of the Sun and it is currently shredding a star twice the size of the Sun. The superfast jet of charged particles being emitted by the black hole contains 125 billion times the energy released by the Sun per year.

A small number of such stellar deaths, called tidal disruption events (TDEs) have been detected. The bursts radiate all over the electromagnetic spectrum from radio, visible, and UV, all the way to X-ray and gamma-ray intervals.

Miguel Perez-Torres, of the Astrophysical Institute of Andalusia in Granada, Spain, stated that scientist have never before been able to directly observe the formation and evolution of a jet from this event.

The dust around the black hole is absorbs any visible light. This particular TDE might a sign of a hidden population of similar events. Mattila and Perez-Torres hope scientists will discover many more events and learn from them by directing infrared and radio telescoped to particular sources.

TDEs are important to astronomy. They provide unique insight into the formation and evolution of jets near massive objects. Such events could be common in the distant universe and studying them will advance the understanding of galaxies that developed billions of years ago.