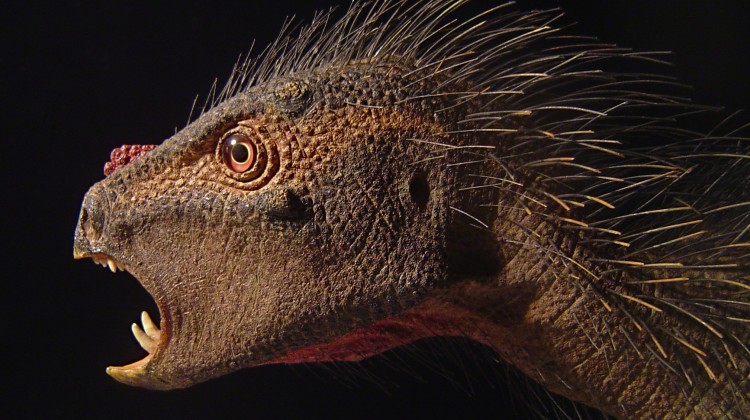 Now is an exciting time on the front of paleontology; last week, the dinosaur Torvosaurus gurneyi topped the new-discovery charts, and this week, Nanuqsaurus hoglundi took center stage.

The new arrival isn’t so new—Nanuqsaurus hoglundi lived 70 million years ago. Nanuqsaurus was a Tyrannosaur, belonging to the same family as everyone’s favorite Tyrannosaur, T. Rex. However, N. hoglundi pre-dates T. Rex by a few million years. This older brother stands in his younger brother’s shadow; N. hoglundi was 25 feet long and stood 6 feet tall at the hip, compared to T. Rex’s 40 foot length and 13 foot height at the hip, and N. hoglundi weighed in at an impressive 1000 pounds, but could have been shattered by T. Rex’s 8000 pounds.

Why was Nanuqsaurus hoglundi so remarkably small? Has there been some kind of mistake? Was a juvenile T. Rex simply miscategorized as a new species? Anthony Fiorillo, discoverer of N. hoglundi and paleontologist with the Perot Museum of Nature and Science, presents in his paper convincing evidence that the new find is indeed a new species. This discovery is based on only a few bones—a skull fragment and parts of the upper jaw bone and tooth-bearing lower jaw bone. “Although the preserved elements of N. hoglundi are admittedly fragmentary,” says Fiorillo, “…there are enough morphological data preserved to provide good support for its place among derived tyrannosaurines.” In other words, those bones do a lot of talking, and the story they tell is a fascinating one.

The reason for N. hoglundi’s remarkable size lies in another remarkable fact: where it was found. This diminutive dinosaur was discovered in the northernmost part of Alaska. Called the North Slope, this region is very similar today to how it appeared 70 million years ago, bordered on the north, east, and west by Arctic seas, and on the south and east by the Brooks Range.
The North Slope of N. hoglundi’s time was much warmer, like that of today’s Pacific Northwest region, and was characterized by forested valleys and flowering plains. It sounds beautiful, comfortable. But the region, being the northernmost tip of the Laramidia landmass, received sunlight only 6 months a year. N. hoglundi lived in a geographically insular region, a sort of island, and had the benefits of daylight for only half of the year. Therefore, it needed to be physically specialized, adapted to living in these very specific conditions.

As an island ecosystem, the North Slope had a real cap on the numbers of plants and plant-eating animals that it could support, which means a cap on the number of predators. In order to survive there, the predators had to be the best at what they did. The Nanuqsaurus skull bones indicate that the species boasted a highly developed sense of smell. All the better to smell prey with during the 6 months of extreme low-lighting. This discovery is even more interesting when compared with the bones of another predatory dinosaur that lived in this region, the Troodon. This species of Troodon (others have been found in Canada and Montana) exhibited unusually large eyes, developed to cope with the region’s lighting. Both predators found their niches in this unique ecosystem and thrived.

In order to be successful, predators living on the “island” of the North Slope needed to make the most efficient use of their environment as possible. This presents the solution to the problem of Nanuqsaurus hoglundi’s size. The dinosaur was subject to ecological pressures such as amount of food available, number of competing predators, and regional temperature. All of these struck a balance in N. hoglundi, resulting in one of the most efficient combinations possible. The same effect can be seen in the Alaskan Troodon. It was adapted to its environment in more ways than one: it was half again as large as other Troodon species. How big was this giant? The same size as N. hoglundi. Success living amongst the pressures of the North Slope required a particular size of predator, it seems.

Many have weighed in on the discovery of Nanuqsaurus hoglundi, remarking with surprise that a “dwarf” of any species could be found at one of the Earth’s poles. The pattern throughout the record of fossils and modern species seems to be that island ecosystems usually produce giants. This dinosaur appears to buck the trend. For example, the poles currently are home to the largest species of bear and the largest species of pinnipeds. Some, then, gape at the fact that the region produced such a diminutive dinosaur.

But the term “dwarf” is quite a misnomer here, and we have only to look at its name for understanding. The word “Nanuqsaurus” is derived from the Inuit word for polar bear (“polar bear lizard”). This “small” dinosaur was 25 feet long and weighed 1000 pounds! It is small in comparison to T. Rex, but such a comparison is apples to oranges. The polar bear, a predator living in a similar environment as the eponymous dinosaur, achieves the same size. The Alaskan Troodon attained a similar size. The fact is not that a “dwarf” dinosaur has been discovered, but that this island ecosystem produced unique and specific predators.