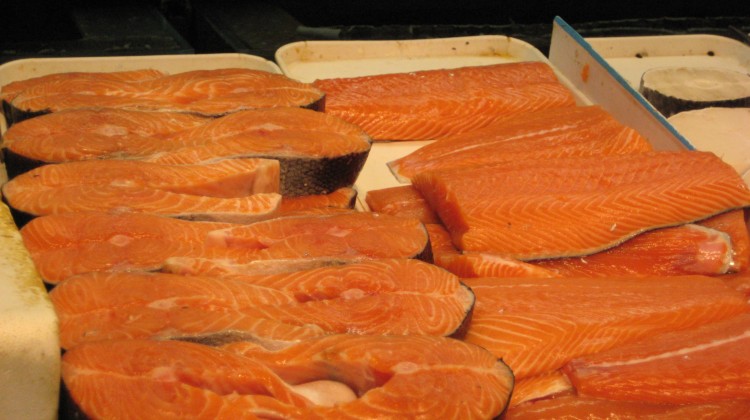 AquAdvantage salmon are fast-growing Atlantic salmon (Salmo salar) that have been engineered to carry a growth hormone gene from the Chinook salmon (Oncorhynchus tshawytscha), as well as a gene from an eel-like fish called the ocean pout (Zoarces americanus) that functions as a kind of switch to keep the growth hormone gene on and active. In the ocean pout, the gene codes for a protein that makes the fish resistant to the cold, a so-called “antifreeze protein.”

These added genes have quite dramatic effects on the growth rates and feed efficiency of genetically modified AquAdvantage salmon. Since the Chinook salmon growth hormone gene is kept active, AquAdvantage salmon can grow to a market size of about six pounds in less time than conventional Atlantic salmon require, 16-18 months as opposed to 31-36 months.

All of this notwithstanding, the genetically modified salmon have their detractors.

While AquAdvantage salmon offer considerable benefits, they have also become the subject of a long-running popular and political controversy. Some biotechnology critics have argued that AquAdvantage salmon pose certain health risks compared with conventional Atlantic salmon.

In a paper that appeared in Nature Biotechnology, Dr. Alison Van Eenennaam of U.C. Davis and Dr. William Muir of Purdue addressed these concerns. Dr. Van Eenennaam is an animal genomics and biotechnology specialist, and Dr. Muir is a breeding and genetics expert for poultry and aquaculture.

One health-related claim articulated by critics is that AquAdvantage salmon are more allergenic than conventional salmon. A study that allegedly demonstrated this has been critiqued by the FDA on the grounds that it was both methodologically flawed, and did not have sufficient data and information.

Van Eenennaam and Muir explained that the question of so-called “endogenous allergens” is actually rather deep and very tricky. In fact, there is not a consensus on the part of experts regarding what level of additional allergens any given food would have to have for that food to be classified as being more risky for the health of the public. This is true not only for fish but also for any food to which some people are allergic.

Put another way, if some people are already allergic to a given food—say, milk—there is not a clear agreement on the part of scientific and medical authorities about what it would take to make milk or a milk product that would be more of a risk to people who are already allergic to milk. As Van Eenennaam and Muir explained, this is especially true because people who are allergic to any given food will tend to avoid that food, whatever it may be.

The subject of allergenicity in traditional foods is also rather understudied, though it is very well known that many foods that contain allergens display a wide range of allergen levels. In many species of food crops, for example, there is a great deal of variation in the levels of allergens present based on the genetics of particular strains and the characteristics of the environment.

Similarly, in fish there is a very great deal of variation in the levels of parvalbumins, the main allergens in fish meat. Again from Van Eenennaam and Muir, a case in point is provided by the comparison between herring and tuna, the former having 100 times the levels of parvalbumins present in the latter. In other words, the main type of allergens found in fish already varies enormously.

Biotechnology critics have also alleged that AquAdvantage salmon have significantly higher levels of the hormone insulin-like growth factor 1 (IGF-1), associated with a higher risk of a number of cancers. Van Eenennaam and Muir explain that the critics are simply wrong on this point, and that the differences in IGF-1 levels between the genetically modified salmon and their wild-type brethren are not significant.

Perhaps the most serious concern raised about genetically modified salmon is the prospect of them escaping from confinement and establishing breeding populations in the wild. In particular, there are fears that escaped AquAdvantage salmon would out-compete and/or interbreed with wild-type Atlantic salmon.

A number of different measures have been taken to mitigate the risks of escape. AquaBounty Technologies maintains a breeding and egg production site on Prince Edward Island in Canada, and a grow-out facility in Panama. The first site stands about a mile inland from a coastal estuary, its land-based location providing an important measure of physical security. The facility also includes a number of quite thorough measures designed to keep the salmon where they belong. In addition to screens and netting, the egg production site uses a closed septic system and a number of other measures to ensure that the fish and their gametes are not able to escape.

AquaBounty also uses biology to diminish any risk of the salmon escaping. There is only one intact breeding population, the one at the Prince Edward Island site. Moreover, producing the fish that are shipped to the grow-out facility in Panama involves a rather complex life cycle, one which has been engineered to minimize any risk to the environment.

The first part of this life cycle is the production of a group of fish which is all female. As in humans, salmon have two sets of chromosomes, one set from each parent. This is known as diploidy. Also like humans and most mammals, salmon and a number of other fish use an X-Y system of sex chromosomes, with males that are XY and females that are XX.

Because X chromosomes are only inherited from the mother, one way to make a population of all-female salmon would be to make sure that those salmon have only a mother. Salmon eggs contain a second set of genes, encapsulated in a kind of vestigial cell known as a second polar body. This is a remnant from the development of the egg, and it is typically gotten rid of.

AquaBounty effectively tricks these eggs into growing, and then forces them to retain the second polar body so that they will have two full sets of chromosomes. The eggs are crossed with sperm that have been irradiated with ultraviolet (UV) light to destroy all DNA, the purpose of this being to stimulate the eggs to develop without receiving any DNA from a male. The sperm are taken from a quite different species, the Arctic charr (Salvelinus alpinus), so that if any are not adequately irradiated and manage to produce viable offspring, they will be hybrids that will be very easy to spot visually. The eggs are given a treatment with pressure shocking to force them to retain the second polar body.

The next step in this strange life cycle is to treat the all-female fry with hormones that make them take on the characteristics of males. These transgender “neomales” look and act like males, even producing viable sperm, but since their sex chromosomes are XX, they can only produce female offspring.

Neomale AquAdvantage salmon are crossed with conventional Atlantic salmon, producing all-female Atlantic salmon embryos with a single copy of the genetic construct. These fertilized eggs are then sterilized by being given a round of pressure shocking to induce triploidy, the possession of three sets of chromosomes. The process is about 99.8 percent effective, meaning about 0.2 percent of all fish produced will remain fertile diploid females.

These mostly sterile females are then shipped to the grow-out facility in Panama. The company located this facility in Panama for a few different reasons, including lower cost and a warmer climate. The warmer climate makes it easier to grow fish year-round, but it also helps to ensure that even if some of the fish were to escape they would have a very difficult time surviving.

As with the Prince Edward Island production facility, the Panama grow-out site uses many measures to maintain the physical containment of the genetically modified salmon. There are also compelling environmental barriers. The site is in the highlands, near a river that flows to the Pacific Ocean, but much of the water is diverted into canals in order to generate power through hydroelectric dams.

Even if the salmon managed to reach the river, they would find themselves in an environment where food is not abundant. The area also contains plenty of predators, including kingfishers, herons, semi-aquatic rodents known as nutria or coypu (Myocaster coypus) and rainbow trout (Oncorhynchus mykiss) that were introduced beginning in 1925. The temperatures farther downstream are also too warm for Atlantic salmon to tolerate, imposing a thermal barrier to the spread of any escapees.

There are also compelling reasons to think that any escaped genetically modified salmon, whether at the Prince Edward Island breeding facility or at the Panama grow-out site, would fare very poorly in the wild. Available data on non-genetically-modified farmed salmon that have escaped into the wild indicates that they are behaviorally ill-equipped to survive in wild environments. Since they have been raised on nothing but artificial foods, farmed salmon that escape have a tendency to starve before they learn to obtain prey in the wild. They also show less of a tendency to avoid predators, and their swimming abilities tend to be poorer.

Dr. William Muir of Purdue also found that contrary to the fears of biotech critics, the genetic modifications to AquAdvantage salmon do not give them overall fitness advantages over wild-type Atlantic salmon. This indicates that even if AquAdvantage salmon did manage to escape, survive and breed, natural selection would probably eliminate the trait over time.

The World’s Most Controversial Fish?

The long wait on FDA approval has exacted a considerable toll on AquaBounty, costing it about $5 million a year and threatening it with bankruptcy on more than one occasion. Over 62 tons of perfectly edible salmon have been disposed of in a landfill at the site in Panama, since the company cannot legally sell the fish.

Part of the delay was due to the fact that when AquaBounty began the formal process of seeking FDA approval, back in 1995, there were no official guidelines for a review. However, the controversy over genetically modified foods has also had a considerable impact on the delay, with AquAdvantage salmon arguably having become the world’s most controversial fish.

The company’s position is that it has been waiting to hear back from the FDA since Sept. 2010, when the FDA held a public meeting on their application. In 2012, the FDA finally ruled that the transgenic salmon were safe, opening a forum for public comment that ran until April 2013 and drew over 37,000 comments. The company also believes that established fisheries are exerting pressure to block approval, due to their fears of competition with AquaBounty’s more economical product.

Final approval may be close. The FDA is long overdue for a formal decision, which should have been given six months after the public forum was closed in April 2013. The final verdict is likely to be favorable, given previous FDA findings concerning the lack of risks to consumer health and the management of risks to the environment. Assuming that the genetically modified salmon are approved, the company expects to be selling them to consumers within about two years.

10 Responses to "Genetically Modified Salmon: What Are the Risks?"