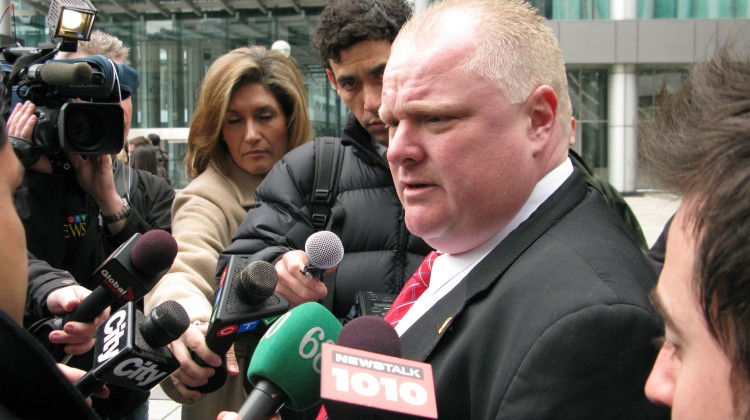 Former Toronto Mayor Rob Ford, whose reign was marked by outrageous antics, erratic behavior, and substance abuse, died on Tuesday, March 22, 2016, from a rare, aggressive form of cancer known as pleomorphic liposarcoma. He was 46. The embattled former politician had fought the disease for the past 18 months since his diagnosis in September 2014.

The maverick mayor gained international notoriety in 2013 after he admitted to extensive drug use, including smoking crack cocaine, public drunkenness, drinking while driving, and other questionable activities while in office. Moreover, there were explicit photos and recorded footage released showing Ford in the throes of drug use, as well as several belligerent rants with colleagues during his four-year tenure as the mayor of Toronto. Furthermore, he also made lewd comments regarding oral sex and other related derogatory remarks to reporters.

Ford’s form of cancer, pleomorphic liposarcoma, is the rarest known subtype of liposarcoma. Liposarcoma is one type of sarcoma, which are cancers that arise from soft tissue such as joints, muscle, nerves, blood vessels, and adipose tissue (fat). Liposarcoma originates in the connective tissue, with cancer cells that resemble fat cells. Conversely, cancers that originate from the tissues lining the organs are referred to as carcinomas or adenomas. Meanwhile, the term pleomorphic refers to the fact that all the cells within the cancerous lesions and/or tumors look different in terms of shape and size under a microscope.

It is important to note that soft tissue sarcomas are not very common. In fact, they account for less than one percent of all cancers in adults. To better illustrate their rarity, approximately 12,000 people in the United States were diagnosed with these forms of cancer in 2014 and nearly 5,000 died from them, according to the American Cancer Society (ACS). In comparison, nearly 140,000 people are diagnosed with colon cancer annually, and 240,000 patients are diagnosed with breast cancers.

In addition to his turbulent four-year term as Toronto’s mayor, Rob Ford also served as a councilor who represented Etobicoke for over a decade. Etobicoke is an administrative district and former municipality located within the western part of the city of Toronto, Canada. It is also part of the Canadian province of Ontario. By colleagues and residents alike, the former mayor was remembered as “a profoundly human guy” who possessed kindness and commitment to his constituents.

Ford was in the midst of his re-election bid for another term as Toronto mayor when he received his cancer diagnosis in September 2014. He subsequently stepped aside and allowed his brother, Doug, to take over his bid for the office. Nonetheless, the office was won by John Tory and the Ford era ended. Mayor Tory stated that his thoughts were the embattled politician’s family, including his wife, Renata, and their two young children. Tory also offered kind words regarding Ford and his time in office. “His time in city hall included moments of kindness, generosity to his council colleagues and real efforts to do what was best for the city of Toronto,” Tory stated at a press conference, surrounded by more than a dozen councilors from across the political spectrum.

At the time of his diagnosis, Dr. Zach Cohen, a colorectal surgeon at Mount Sinai Hospital in Toronto and one of Ford’s treating physicians, the tumor was estimated to be about two to three years old. It was described as a very rare and difficult cancer. His tumor was found in his abdomen and measured approximately five inches by five inches (12 centimeters by 12 cm). According to the ACS, liposarcomas can develop anywhere in the body, but are often found in the abdominal region, thigh, or behind the knee. Patients are often diagnosed with this form of cancer between ages 50 and 65. Ford was 45 years old when he was diagnosed.

Former Toronto Mayor Rob Ford died on Tuesday, March 22 from a rare, aggressive form of cancer. He was 46. His 18-month battle with pleomorphic liposarcoma is now part of his legacy, as it was his cancer diagnosis that ultimately prompted him to step aside in favor of his brother, Doug, during his mayoral re-election bid in 2014. The embattled politician had been undergoing cancer treatment since his diagnosis in September 2014. Despite his personal troubles, Ford is remembered by family, colleagues, and friends as a very caring, compassionate politician who always put his constituents first and tried to do what was best for Toronto.